There’s really nothing else quite like Unity, a platform encompassing print, publishing, music, and skateboarding, all centring queer and trans people.

Jeff Cheung would post Riso-printed flyers around Oakland calling for friends and strangers to join him for weekly Unity skate parties. The Rockridge carpark is dotted by the ancient trees that gave Oakland its name; for a few tender hours at dusk, the tarmac underpass becomes a skatepark and a refuge. What makes these gatherings different from other skate gatherings is that they are pop-up safe spaces for people (and skaters) who have typically been excluded from the narrative: queer people, trans people, and people of colour (QTPOC). ‘All experience levels and identities welcome’, the posters would say, ‘If ya had fun… ya won!’ It was no accident that Unity was founded at the end of the 2016 election cycle, when the message meant more to certain communities than ever. And when Jeff travels, so do the queer skate days: Barcelona, Berlin, Denver—anywhere that Jeff finds himself, he creates space for marginalised folks to feel at home and unite for a minute.

I met Jeff and his boyfriend Gabriel at the Los Angeles Art Book Fair. Their Unity stall was a stack of skate decks, posters, and zines painted with bums and boobs and willies and wiry-haired pits and balloon-like figures bouncing across surfaces. Jeff’s constellation of naked figures is diverse and free and does little to shy away from sexuality. All welcome. Jeff and Gabriel were planning a skate meet for fair attendees—community-building wherever they go. At some point you will probably step into their community, too.

I think of all the times I’ve hung out with Jeff and Gabriel and it’s always been in a place of celebration and freedom. They cast a big, beautiful umbrella out into the world, and everyone beneath feels dry and safe. I remember the night held at Wolfman Books in Downtown Oakland to launch their print space, housed on a mezzanine above the bookshop, walls bedecked with tees and prints. The room was a punkish medley of skaters and musicians and art kids and print kids and book kids. Everyone looked so refreshingly different from each other, but everyone was connected by the same joy.

This space epitomised their world: rather than singling out one course of creative direction, they have embraced many, and they’ve made it all feel universal and accessible. Everybody has a place in this world. Jeff and Gabriel use their art, sport, and community-building as a liberating tool for those who may not be able to express their honest selves elsewhere. Unity wasn’t chosen as the name just because it sounds good; it’s their message, their mission, a manifesto, and a promise all in one word. Not surprisingly, their home, too, feels like a space where expression has no boundaries; the walls are filled with art pieces often swapped with mentors or strangers. 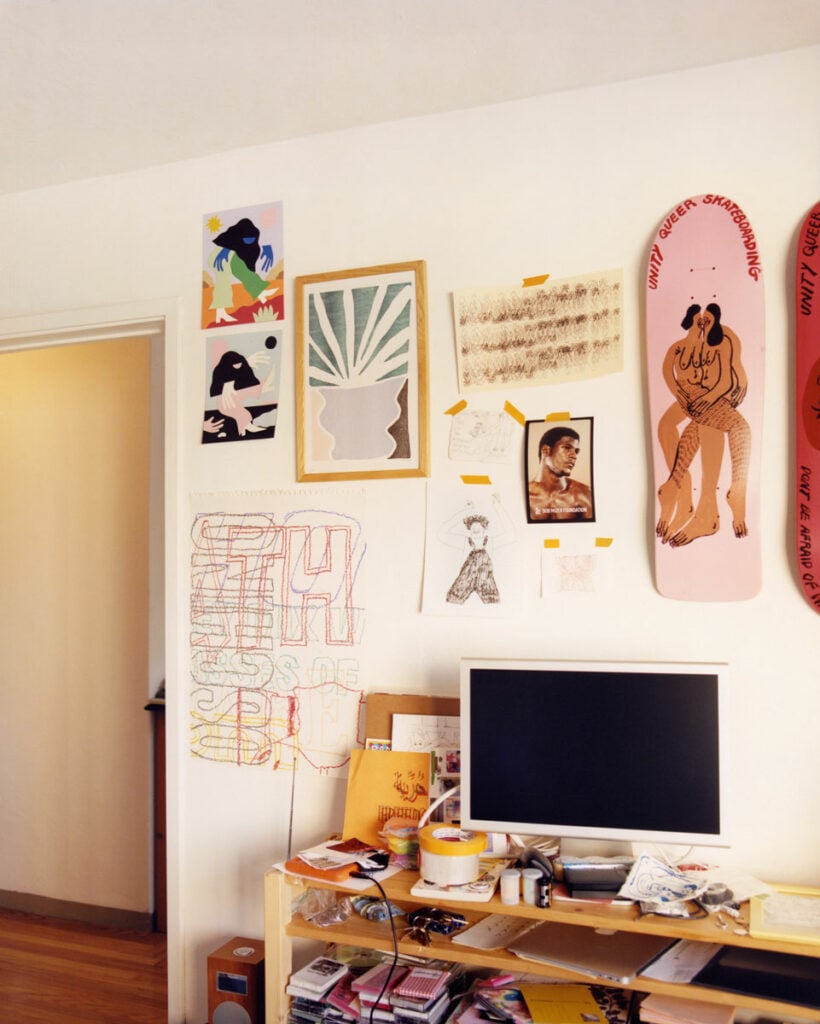 Jeff: Our place is a bit chaotic at the moment; we have some queer skate friends coming to stay for a bit. And we’re moving apartments, too.

Gabriel: Our friends are escaping the East Coast. Plus we get to show them around, and our favourite spots.

It’s cool to hear people are still coming to the Bay Area specifically to skate, given the city has always been a place for transformative skate innovation.

Jeff: The Bay Area is an iconic place for skateboarding. A lot of the same spots are being skated, but people are approaching things and skating a lot differently these days. 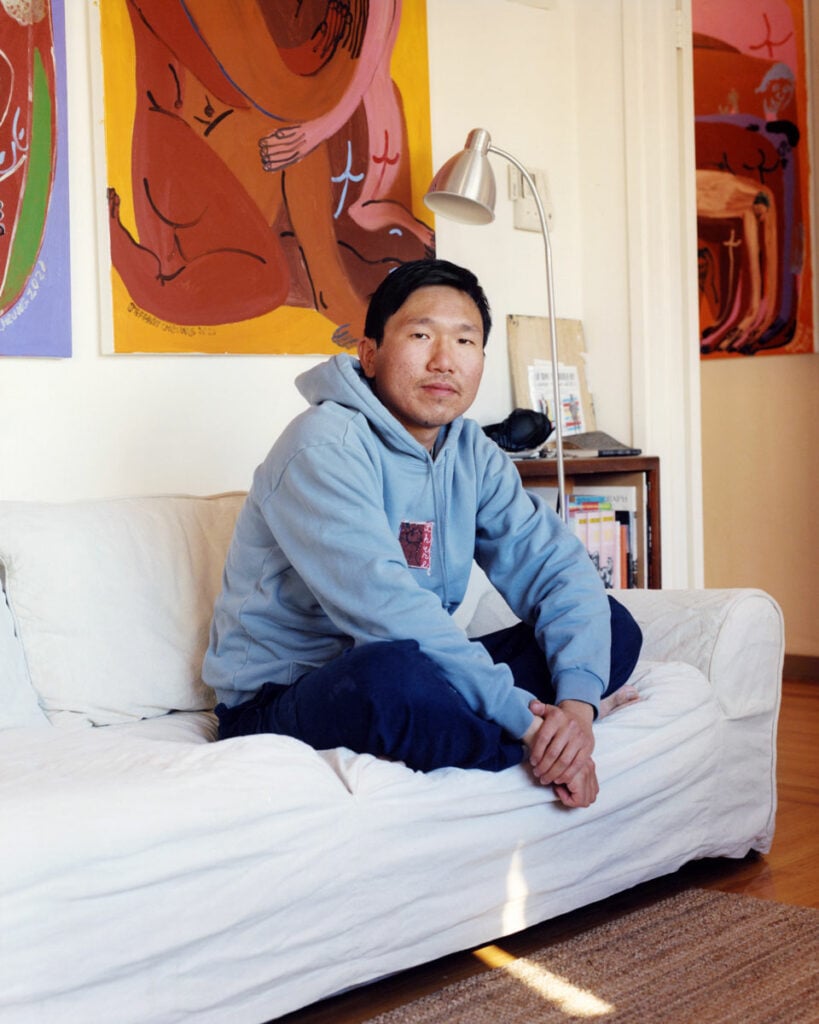 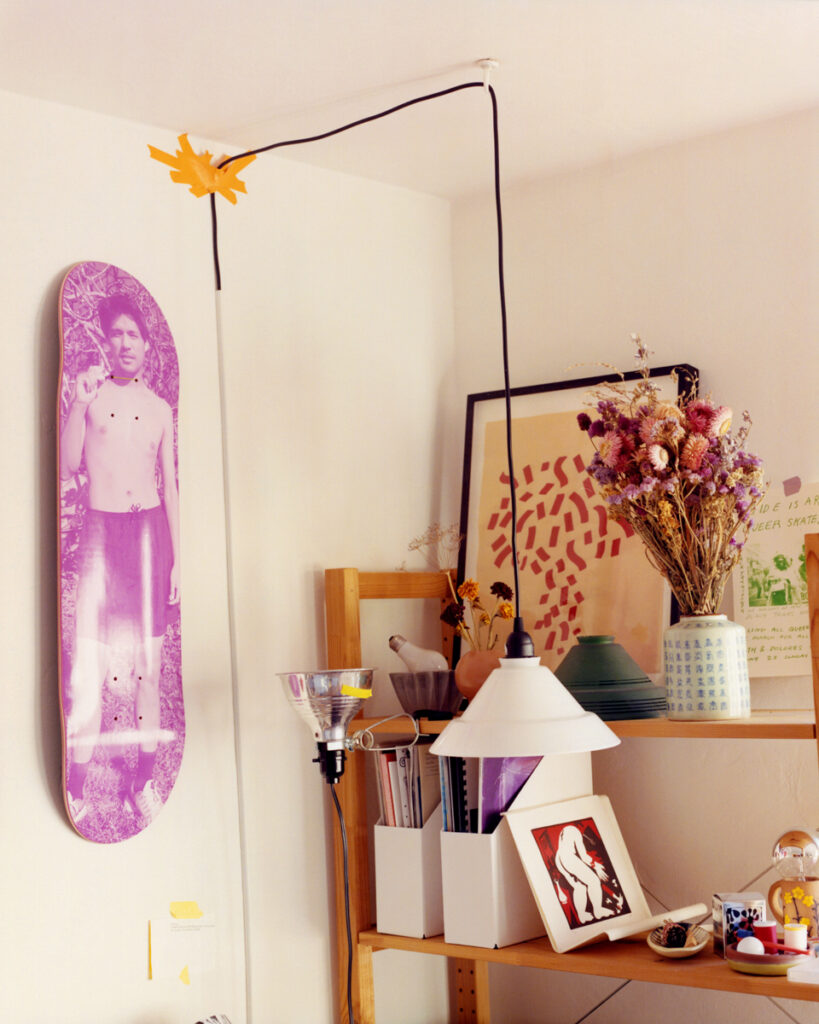 And Unity is a continuation of that innovation.

Jeff: When Unity happened, there was a shift for skateboarding. It was really the first time that queer and trans skaters were coming together.

Was the initial aim behind Unity to create this safe space for different types of skaters?

Gabriel: Honestly, it’s just that Jeff loved skating and wanted an excuse to do it again.

Jeff: I do love skating. I hadn’t skated for 10 years, and rediscovering it felt a bit like being a teenager again.

Gabriel: But really, Unity started as a music project, then we had the space and print shop where we first started making art and zines and flyers. But then he started skating again and that became much bigger than all the other projects. 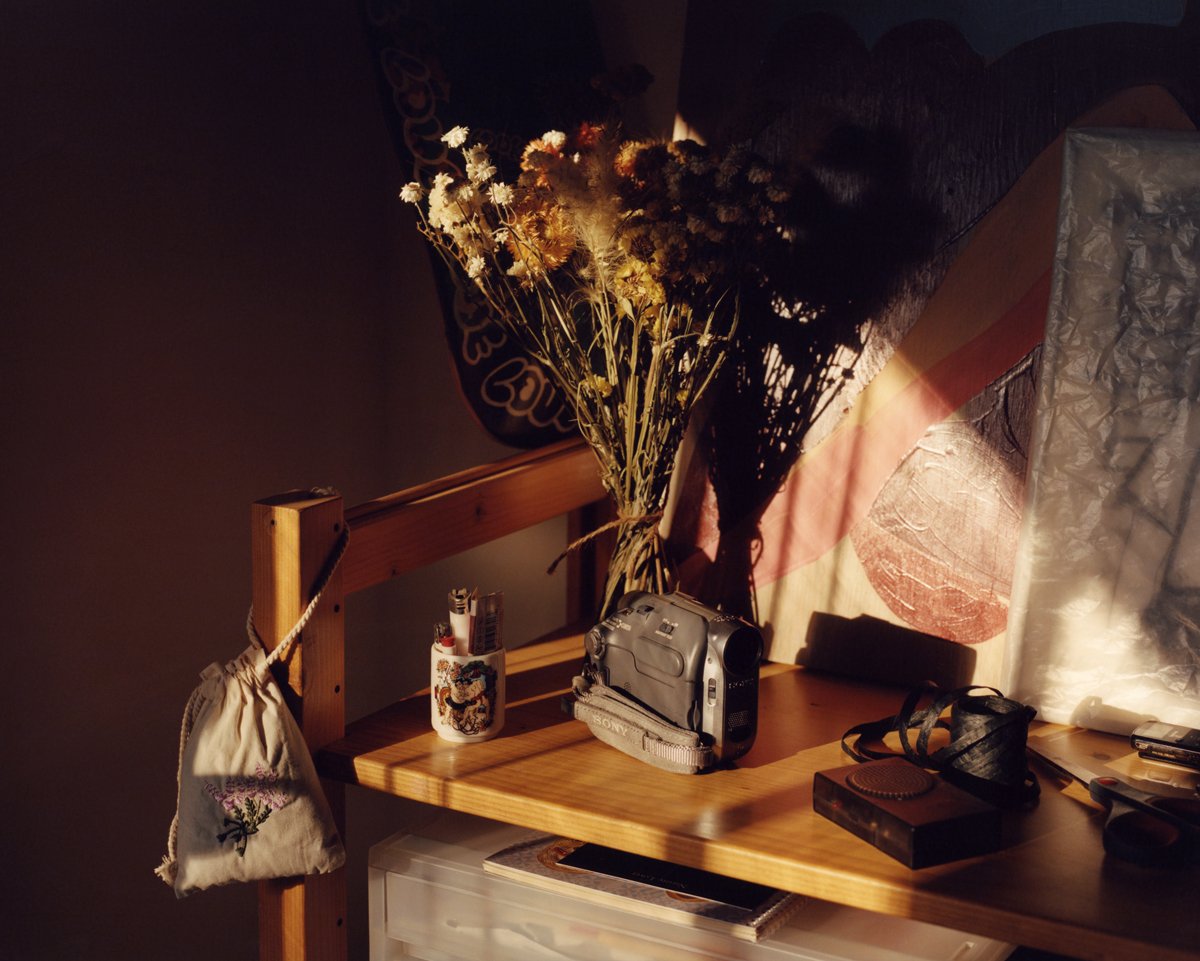 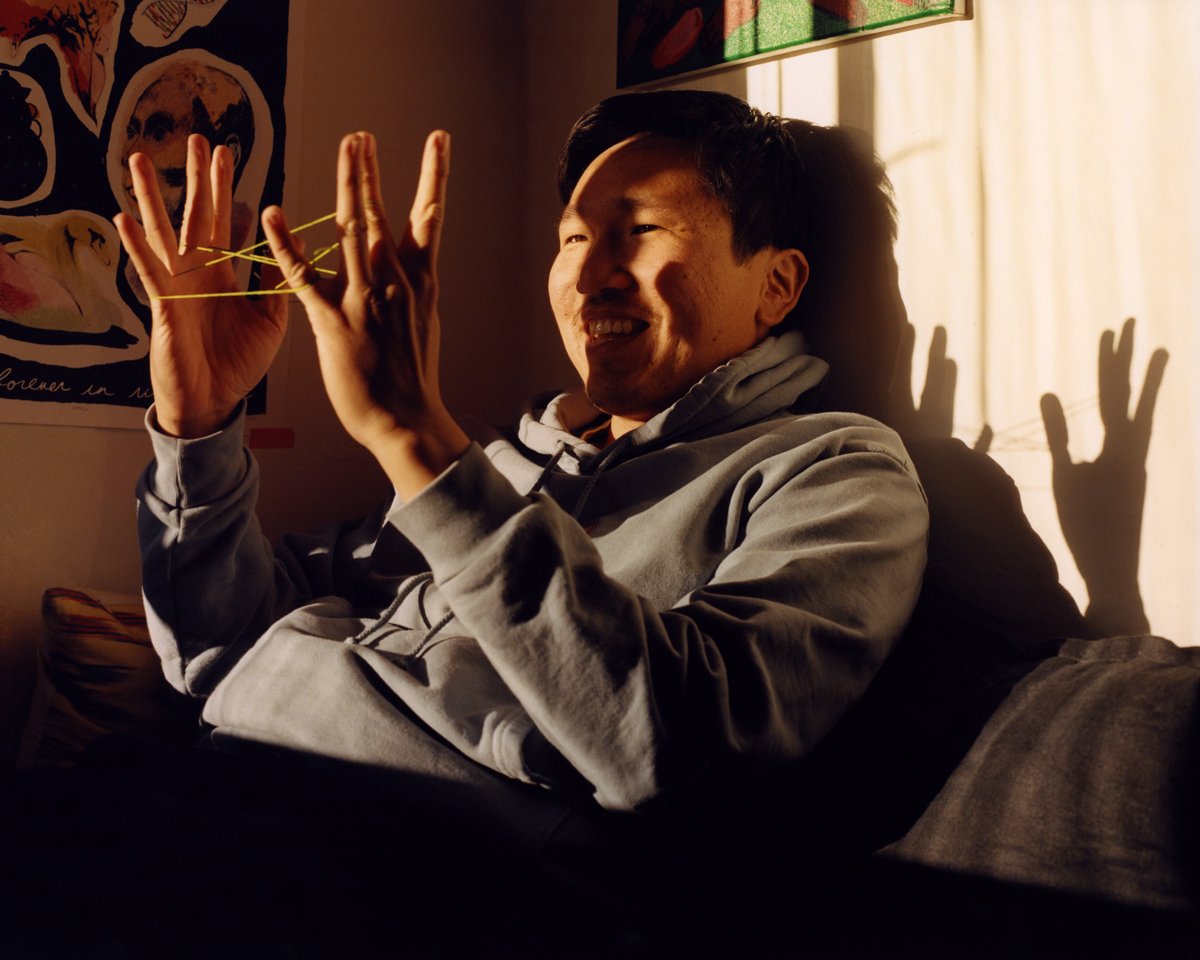 You were enjoying the skate community more in a way?

Jeff: I grew up skating, but as a queer person in a very non-queer skating environment. We had maybe a few queer friends, but for the most part we were hanging out with straight people, and I don’t think you realise how freeing it is to just be around other queer people.

And of course, traditionally, skating is more of a white male–dominated activity.

Jeff: Exactly, and that just made me think that I want to be around more skaters who are like us. And we wanted to think of ways to encourage people of colour, queer, and trans people to participate.

Gabriel: We would do giveaways like free skateboards for queer and trans people of colour, and workshops geared towards younger people. We were trying to think of ways to engage black and brown, queer, and trans people.

Did you use the art and the print space and the flyers for the skate meet-ups to also widen that community?

Jeff: Yes, definitely. And it made me think about the way I made art, especially when making art on the skateboards to give away to skaters in this community. I want to create artwork that reflects and uplifts the community and people I want to be supporting.

Creating art that was more representative of different figures and identities.

Jeff: Exactly. At the beginning of the skateboard giveaways for queer and trans youth, I would start with a pile of blank boards. For our first giveaway there were 30 or 40 kids lined up. I would ask, ‘What do you want the person to look like?’ And they would just describe the type of body they wanted represented: hair here, no hair there, no nipples. I was painting characters that were all very different. That’s when I started to make happy queer and trans imagery that would make people feel good about themselves and enjoy being on a board. 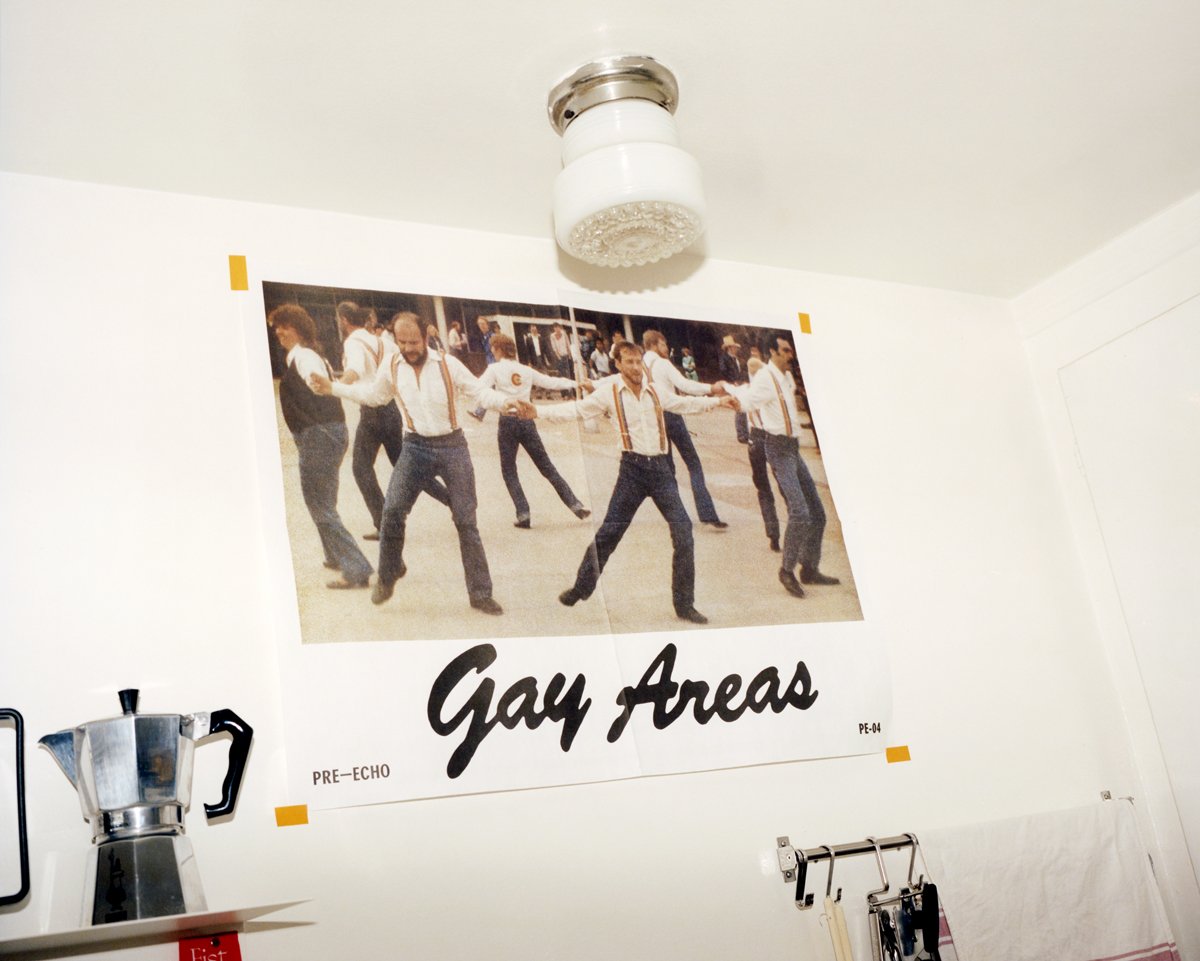 That’s so supportive and empowering and validating.

Gabriel: Which is the opposite of how I imagine many queer and trans people might feel in the world of skateboarding.

Gabriel: We will organise skate meet-ups when we travel, then watch people exchanging phone numbers and Instagram handles, connecting.

Tell me about those first meet-ups in Oakland.

Jeff: The Rockridge spot is the BART station parking lot, but it’s a well-known slappy curb spot. A slappy is when you just ride onto the curb and it grinds, so it’s a basic but satisfying trick. At the first meet-up I met a handful of other queer skaters, and that was right about when we started Unity Skateboarding.

Gabriel: But we then got messages from other people in Oakland and San Francisco about how they could meet and skate, so we decided to make a flyer basically saying, ‘We will be here in Rockridge on this day, and anyone can come’.

Jeff: Because we knew so few queer skaters, we were surprised when 30 or so people came, all types of people. And, I don’t know, the feeling was unreal. It was really hopeful and inspiring. Everyone was so stoked to be learning together. Most people were new to skating or just getting back into it, but now whenever you go past Rockridge you’ll see queer and trans skaters there. If people come from out of town, they will say, ‘I want to go to this spot’; they know it’s hot. 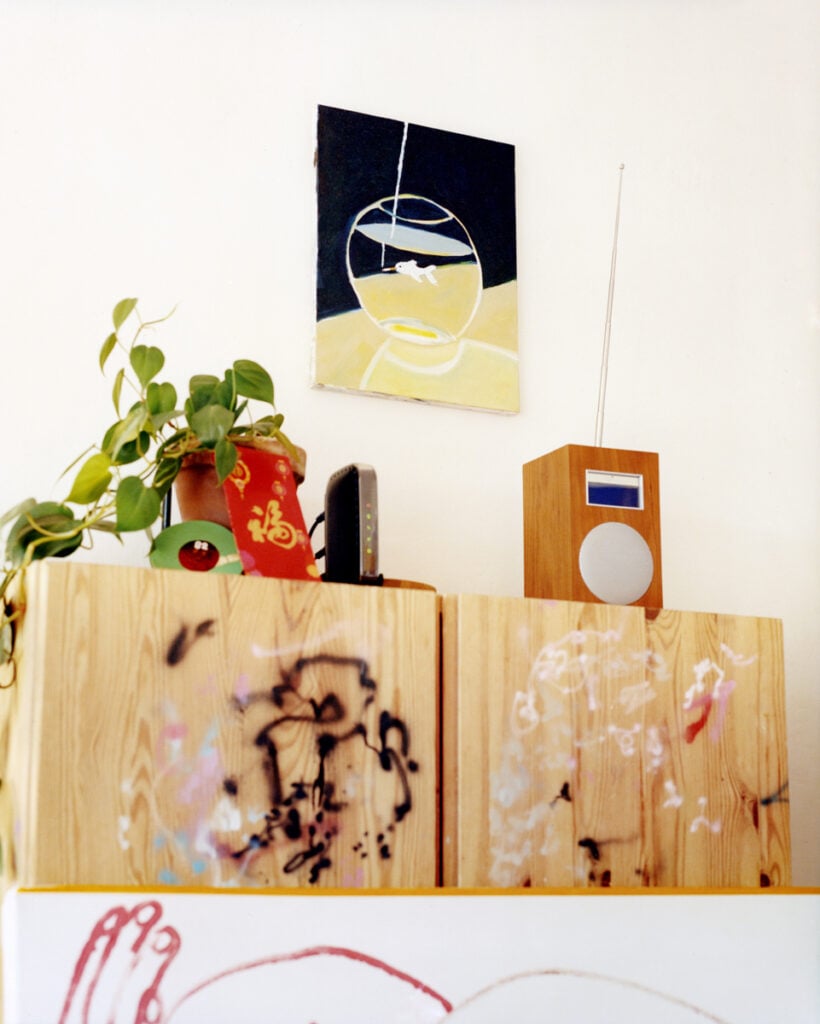 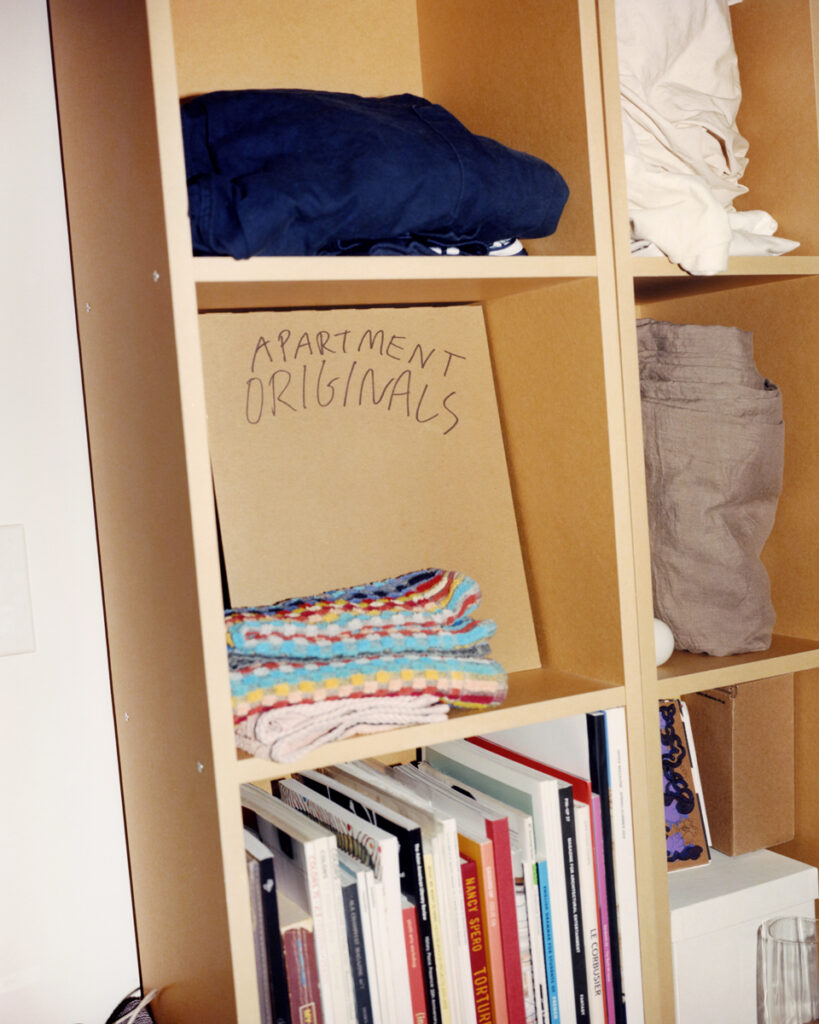 The flyers you’ve made for the Rockridge meet-ups must be collectibles at this point, right?

Gabriel: Ha, I wish we’d held on to one of each. But at least they’re on the internet.

Jeff: I used to flyer them, but later on I would just post to Instagram. It was really cool though because my friend Mae Ross was one of the first trans skaters we met, and she had just seen the flyer stuck to a pole. She just looked us up and found us. She ended up being a really active part of the queer skate community.

Now that queer and trans skate groups and skate meet-ups are more frequent, where does that leave Unity?

Jeff: Obviously there is still lots of work to be done to increase queer and trans visibility in sport and media, but I do feel there’s less of a need for Unity now than there was five years ago.

Gabriel: A friend did bring us a cool idea a few years ago, but at the time we were like, ‘How are we going to fund that? How can we do that?’

Jeff: She had the idea to do a really big queer skate festival with music, workshops, talks, and stuff. Like a big queer skate conference. Bring people from out of town, rent a big site. I feel it would be something easy to do in the Bay Area given how many queer skaters are based here.

Gabriel: It feels like a good next step. We are so happy that we started Unity and that a queer skate project has now existed in history. And we are so happy that other people are carrying on the movement in so many other groups. 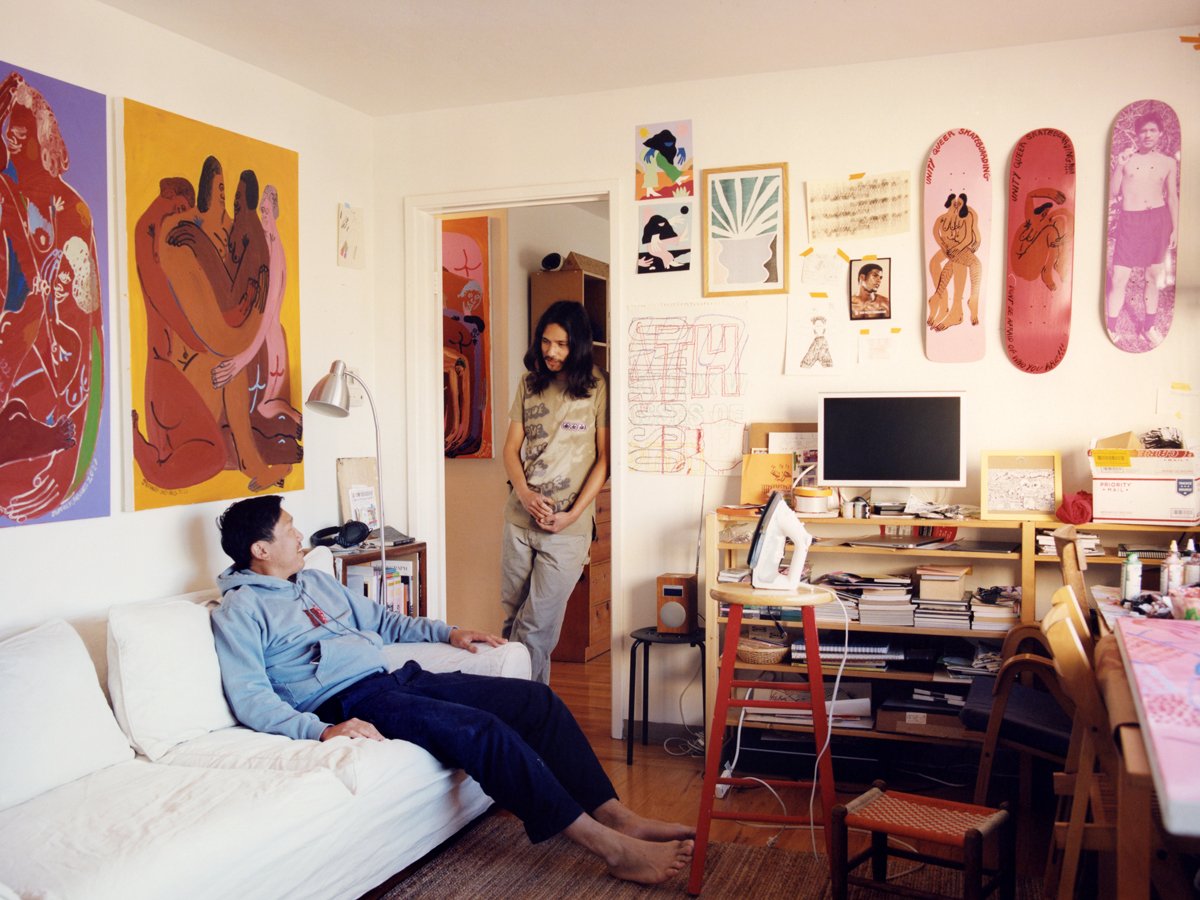 I think Unity truly brought a lot of joy. I think about our friendship and the places we met and used to hang out, still sometimes hang out, and it’s in places where people feel joyful and comfortable and that’s something very special.

Jeff: And honestly, other people have said that to us, or something similar, and it really makes us feel super thankful. It kind of motivates us.

Gabriel: Even though sometimes it can be exhausting managing these worlds, I also feel a responsibility to keep doing it, because as long as we have the resources and the platform, we can continue to support and empower people.

Jeff: We’ve been hanging on to a lot of memories, especially this year, now that a lot of those things like skate days and art book fairs or workshops aren’t happening. It makes it even more sentimental to look back and be like, ‘Oh, remember that event? I remember that skate day’. I don’t know. It’s really nice. I keep a lot of flyers and stuff too.

You should keep making flyers, but just for your own lives.

Gabriel: Just a flyer for lunch on Tuesday!

Jeff: You just distribute it to one other person who you live with and be like, ‘Hey, take the flyer’.

I would take your flyer.