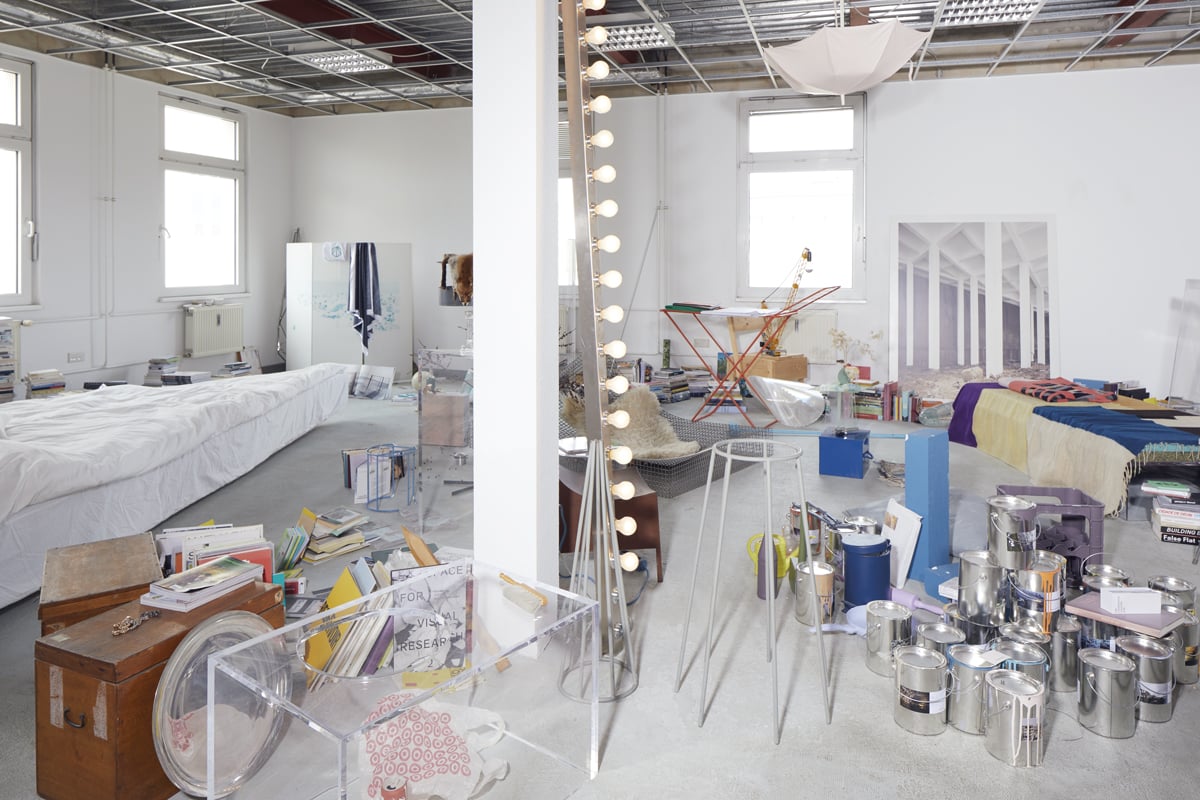 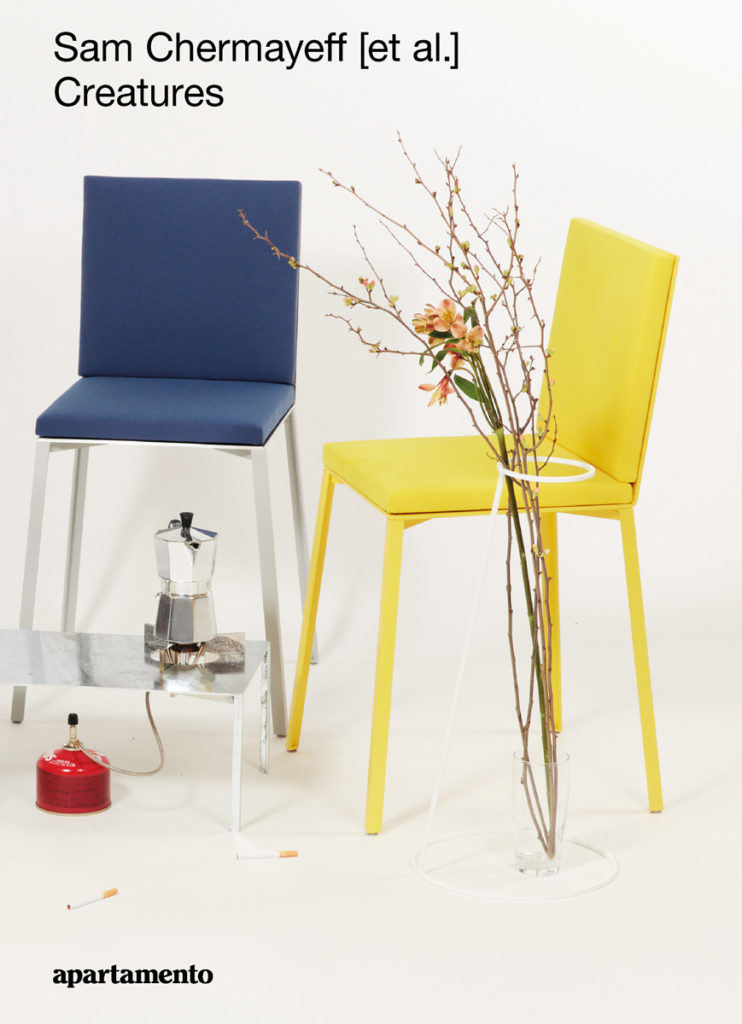 In Sam Chermayeff’s very first monograph, the abbreviation et al. that follows his name emphasises the everyday practice and outreach of his work, ever since he established his offices in Berlin and New York about a decade ago. First, and above all, it makes reference to and acknowledges the many collaborators, staff members, and interns that have been involved in one way or another in the further development and realisation of his projects, both buildings and furniture designs, proving that the production of architecture or design objects is in essence a collective phenomenon, not only implying the single ‘genius’, but also his right hand, associate, collaborator, manufacturer, producer, developer, distributor, critic, or client. Second, and as a placeholder, it indicates a practice that, among architects, is often considered secondary, namely interior design—in Sam’s case a pivotal branch within his enterprise. And, third, most tellingly, the abbreviation refers to particular characteristics in Chermayeff’s ‘things’—as suggested by Dieter Roelstraete in his thought-provoking essay—the so-called inclusive, transcultural, trans-social, and often dogmatic momentum that seemingly divines his constant output. Considering this, furniture acts in more than one way as the intermediary scale between architecture and the human body; in the same way that architecture acts as the intermediary scale between furniture and the city. In view of the particular concepts, materials, settings, and, above all, the multiple environments in which his objects appear, the fluctuating scalar relation between body, furniture, interior, building, and by extension the city and cultural life, is apparent. Form, function, material, context, and site all seem to blend into each other, and therefore question conventional solutions, too.

(A personal note:) following the exhibition ‘La Scène’ by the Portuguese architect Eduardo Souto de Moura that I organised at the Architekturforum Zürich in 1992—his very first solo show ever, and prior to his Pritzker Prize—I became aware that pieces of furniture are actually pieces of architecture. His presentation was centred around two simple but nonetheless highly sophisticated prototypes of constructed furniture: a large dining table with a smaller club table version underneath, both placed on a grass carpet that somehow marked a plot or site in its own right. The ensemble or scene represented a house, a filigree construction and protective space where one could simply meet, imaginatively and in reality.
Sam Chermayeff’s very first furniture design, Star Bench, with Johanna Meyer-Grohbrügge, an onsite prototype also developed on the occasion of an exhibition, the group show ‘F-Utility?’ curated by Porter Clark at the Land of Tomorrow Gallery in Lexington, Kentucky, in 2010, is an excellent example of the aforementioned casual blend. Built in two parts and assembled onsite around an existing steel column at the very centre of the gallery—that also potentially could be a tree trunk in a park—the bench is simple and effective. The star-shaped seating of six irregularly sized tips welded on a dozen thin poles marks a meeting point. Rather than an average orthogonal bench, it allows an increased number of people to talk, facing one another from multiple positions, resulting in an optimised way of communicating and, above all, forming a community.
In another early furniture design, the so-called Ad Reinhardt SANAA Chair, assembled by Chermayeff in 2013 as a unique piece, blending gets another, yet transcultural meaning. Here, he has used the by now iconic and nameless chair of his former employers, the Tokyo architecture firm Kazuyo Sejima + Ryue Nishizawa / SANAA—a sparse chrome steel chair designed for the Japanese Pavilion at the 8th Venice Architecture Biennale in 2002, at the time curated by Arata Isozaki—and mounted on its backrest an original work by the artist Ad Reinhardt, the multiple-titled 9 Squares made in 1961, a canvas with resin cast in an aluminium frame that Sam found in the attic of his grandfather Serge’s house. This very object—a sculpture?—not only interconnects two very distinctive works by authors from different backgrounds, continents, and generations, it also amplifies, condenses, and contrasts each other’s minimalistic vocabulary, or, if you wish, the ‘infinite’ of the polished, mirrored seating with the ‘black hole’ of the backrest.
From 2015 onwards, Sam Chermayeff developed two other new furniture typologies, a bed and a kitchen, both of which literally represent the idea of a community—or, if you like, a ‘joint venture’. His Triangular Bed, by surface 40 percent larger than an average double bed and occupying more than 4.5m2—ideally freestanding—can easily be considered a room of one’s own, a hermaphrodite existing between a service area and a playground that is obviously destined for more than one purpose, be it to rest, relax, have sex, or sleep. The design is taken to such a height that even the bed linen is bespoke, including triangular couture pillows. If the Triangular Bed stresses a common use, the individual elements of the Free Kitchen seem to form a community in itself. Developed first as a prototype-ensemble for the architect’s own use, basically designing unique single plinths and stands with specific heights and proportions for some of his own kitchen gear (toaster, sink, bin, fish tank, etc.), and combining them with kitchen furniture, such as the dishwasher, fridge, stove, shelf, and table, the kitchen-concept itself became somehow freestanding, if not liberated. Loosely arranged and seemingly without a fixed position, it is—in Chermayeff’s own words—‘a malleable kitchen that, while programmatic, does not prescribe space’. As basic and as plain as this may appear, the Free Kitchen offers a true innovation. Evidently, the ensemble is open, but at the same time it is porous too, by actively interacting with other areas of our habitat.
Having so far realised some 50 furniture prototypes, small series and custom-made equipment, it soon became evident that this book project would only focus on his micro-realisations, the ‘little creatures’, and not on his building refurbishments, many of them still under construction or in the design process. The book documents almost every one of his diverse designs, ranging from a bathtub stand that includes a massive granite stone to a bespoke steel stool for a concert piano player, from a tiny stove table to be placed on top of a dining table (c.f. Souto de Moura) to a monumental street light table, just to name a few. The different projects are arranged in particular sequences that somehow resonate with excerpts from Dieter Roelstraete’s text, which runs in parallel—notions such as: thing theory, ‘La table’, kitchen islands, coffee table book, a precious ‘other’ social space, or getting through the morning. The numbers next to each image that identify each of the presented objects in detail in the accompanying index also serve as pagination. The index itself, commented and illustrated by SCO, is structured according to the furniture’s chronological appearance throughout the book. To conclude, the very nature of Sam Chermayeff’s unique and outstanding ideas could probably best be summarised—even promoted—with the following amalgamated poem that indirectly refers to the title of this book (c.f. endnote) and paraphrases the voice of all of Chermayeff’s creatures! 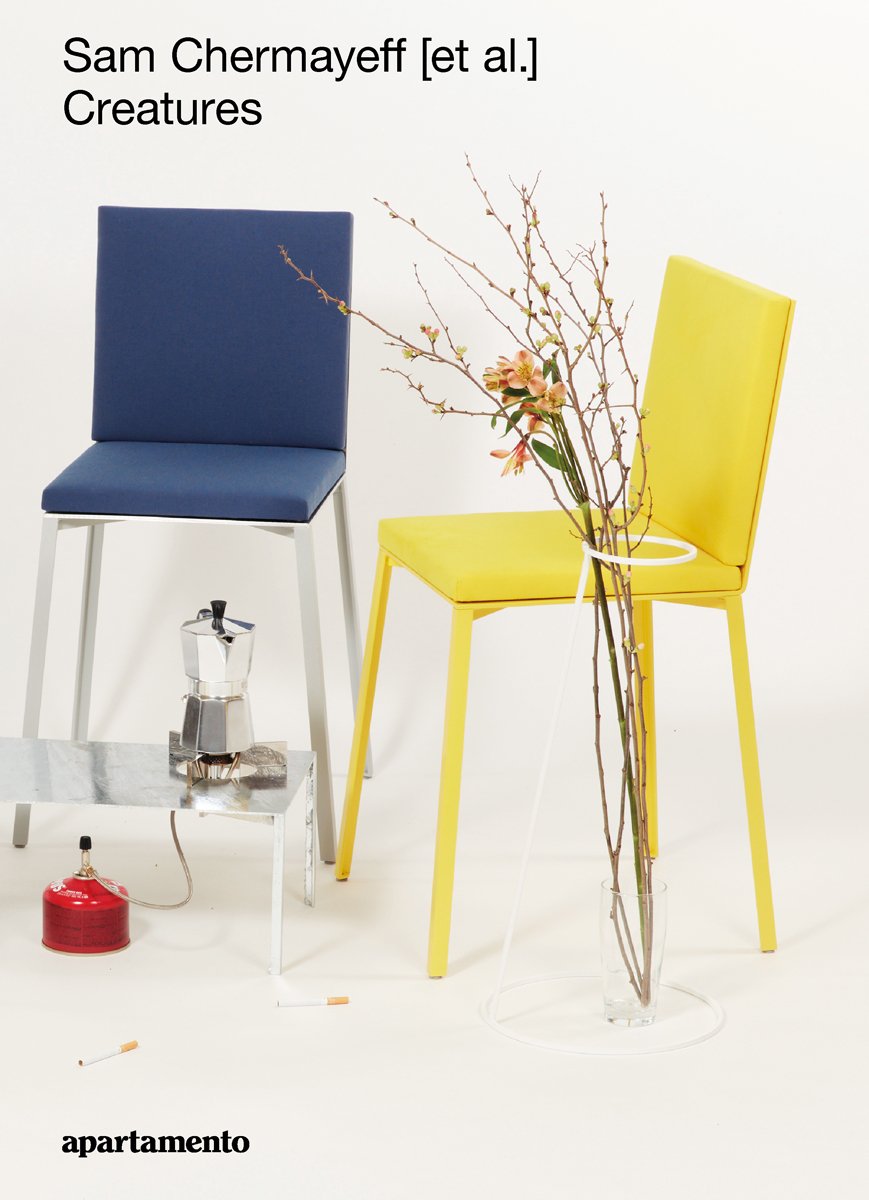 sold out :(
The product is being added to cart!