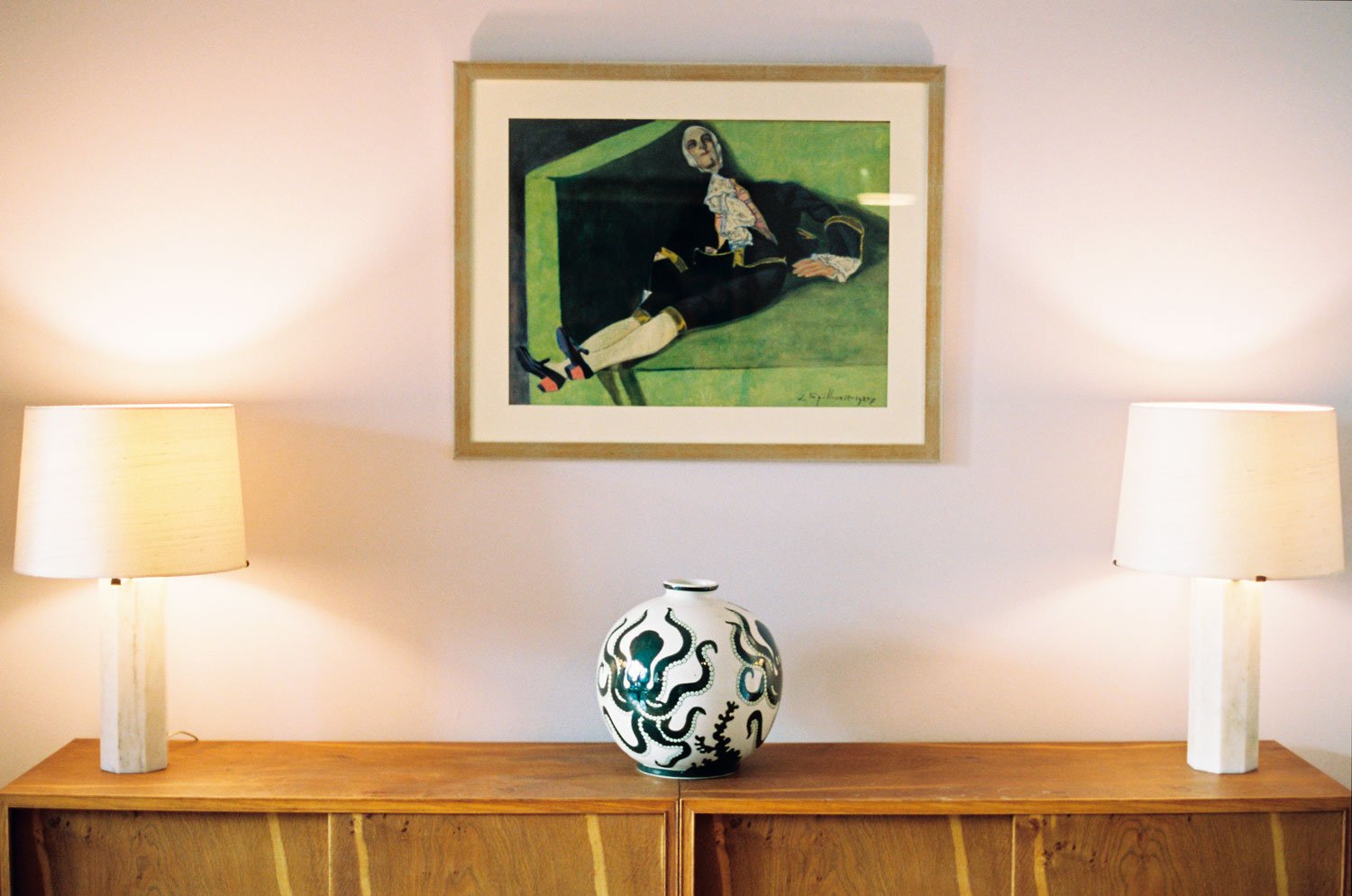 New York: Sitting in a French restaurant in New York for lunch with Nicolas Party, we started by talking about how to deal with a cold. It’s the height of cold and flu season in New York, and Nicolas has just got back from Brussels, having stopped by San Francisco and maybe Dallas. He told me to only eat my favourite food when I’m sick. He would only eat Coco Pops when he was a kid, three times a day. The travel is a pretty regular thing for him. Having a few museum shows every year, in the US and Europe, moves him around a lot. He just recently moved to New York but has decided to keep a base in Brussels as well. In talking about his work, it’s easy for the reader to imagine something kind of ‘regular’. Nicolas’ subjects are the most basic and traditional subjects of painting historically: portraits, still lifes, and landscapes. However, one can only really describe his work as irregular. His pictures exist in the past and the future, both at once, while weaving between all the other points therein. An elastic, nonconforming, and knotted kind of time.

Paintings in an exhibition are characters in a play, and so are the dinner guests during one of his performances. His pictures will have all the components of a recognisable scene, but something is off. It’s not unnerving in any way, but rather unexpectedly beautiful—a peculiar skin tone or an unrecognisable species of tree or the way a piece of fruit is positioned. Irregularities find themselves into the work, which is all at once surreal and classic and sci-fi and noir and symbolist. 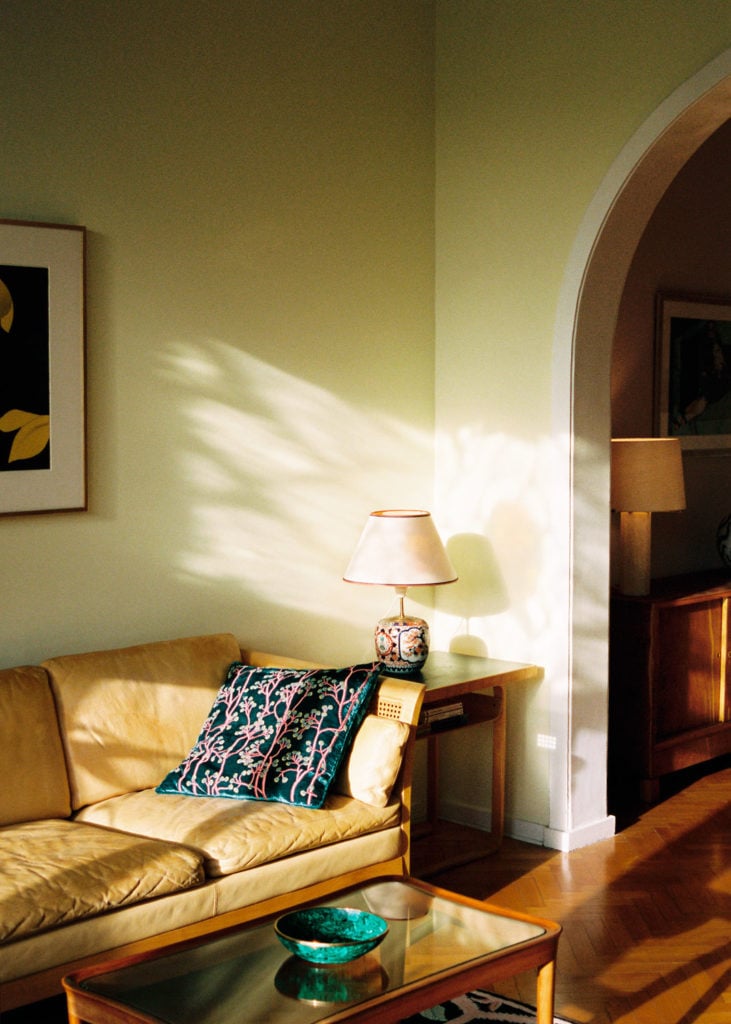 The tuna niçoise is really good.

It’s too lamb-y for me. Do you like lamb?

Yeah, I like everything. Niçoise sounds good. But you’re getting fries, that’s going to drive me crazy.

I don’t know why I wanted all that.

It’s because when you’re sick, your body still needs food, but you don’t feel like eating, so it encourages you to only choose something you really, really want. I always eat Coco Pops. 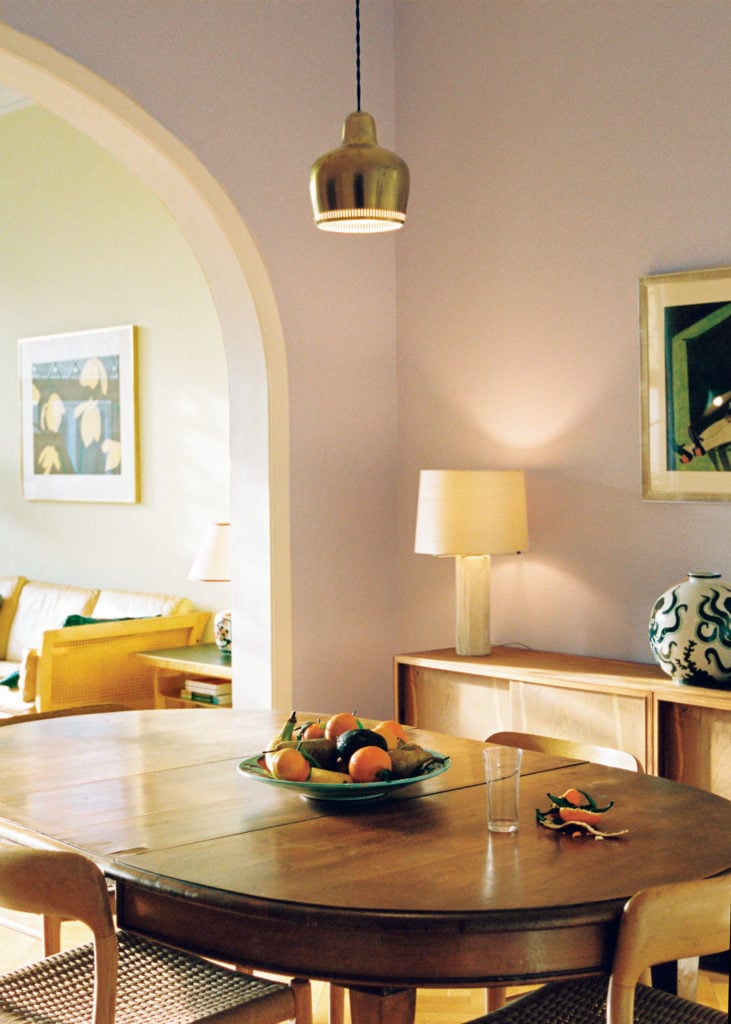 Yes, I love them. That’s all I ate when I was a kid. I was the biggest pig. Everything that was with vegetables, or cooked, I called it ratatouille and I couldn’t even look at it. It would make me sick. I didn’t eat cheese. I didn’t like pasta with any sauce on it.

But how old were you?

Until I was 14. I was eating Coco Pops three times a day.

Waitress: Are you ready?

I’ll have cauliflower soup and fries.

Dining has actually become a part of your work and the shows that you make. How did that start?

When I was in Lausanne, I had an artist group called Blakam. We started as a band and then moved to making visual art. One of the main activities was to design sets for musical events. I loved that collaborative work—working with musicians, inviting an audience, designing the invitation, creating and building the set. We tried out a lot of different types of music, from John Cage to friends playing punk rock. We were trying to see how the different stages would influence the experience of the music. Later, in Glasgow, I wanted to try to do that same thing, but with a dinner party. I wanted to make a set for a performance where everybody acted their own role. The collector, the artist, the curator, the museum director, the gallerist, etc. The only role that I shifted was that I asked the gallery director to be a waiter. For the event, the set design included plates, tables, stools, and the food. Everybody was seated on elephant stools. It was a dinner for 24 elephants.

Is there a similar intention when you introduce architecture into your exhibitions?

Yes. A gallery space is a bit like a theatre; people come to the same space to see very singular stories, and in order to make the public believe in the world of the story you need to build a set that makes you forget where you really are. I can’t put actors on a blank stage. They need a set.

At Karma, you changed the entire space. You made it bigger and smaller at the same time.

That space is a classic white cube. For the series of paintings I was working on for the show, I felt it would not be right to see all of them in one sightline. So I divided the main gallery into three little rooms. The idea was to create individual rooms with different atmospheres. Each room was painted with two different colours. 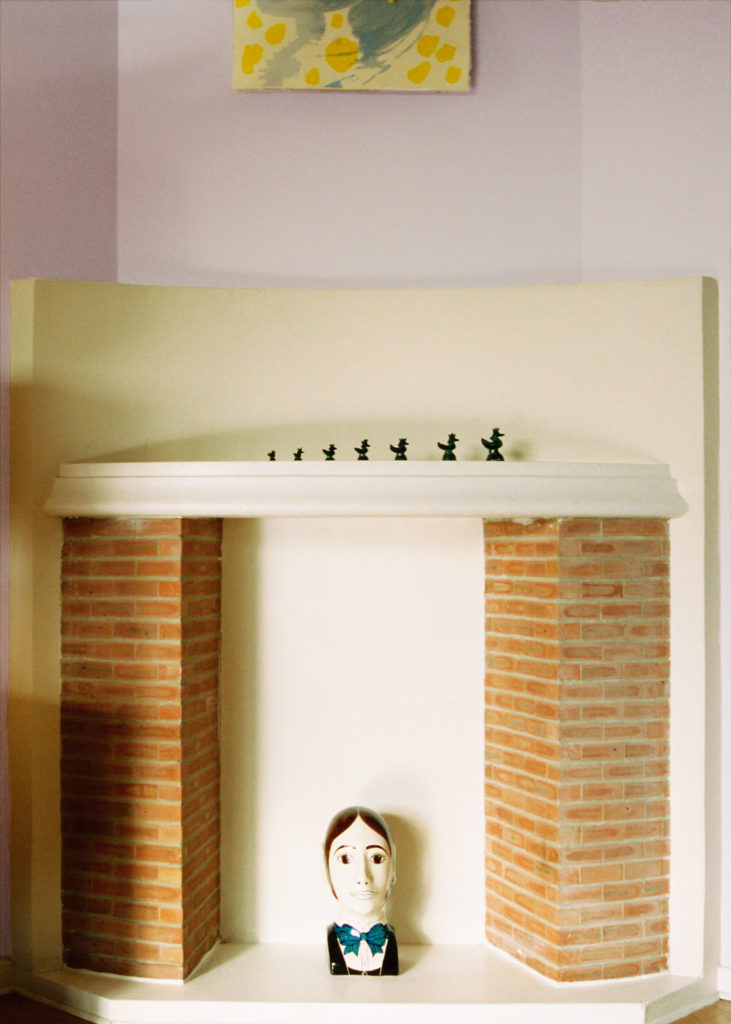 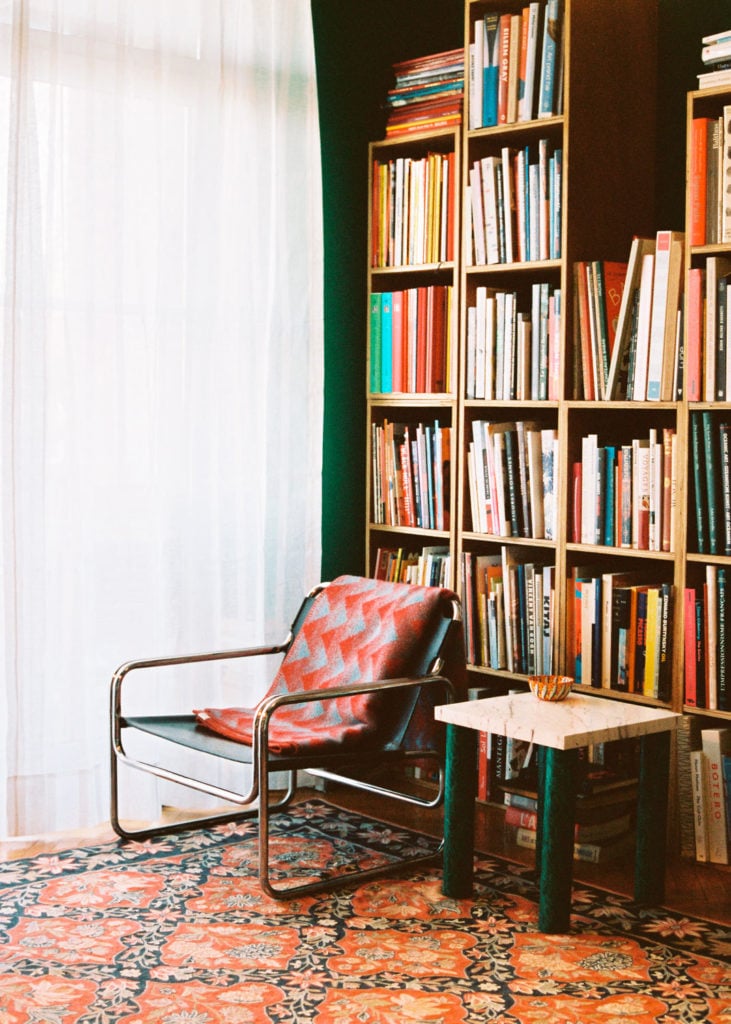 There were also arched doorways between each room.

Those very simple architectural interventions made the space feel very different to what it was before. They made me think about the Convent of San Marco where Fra Angelico painted a series of frescoes. There the connection between the architecture and the fresco is so tight, and it was on my mind a lot when I conceived the show. In architecture, arches have such a strong effect on the body, it feels like a hug from on top of you.

Your apartment has those arches, too.

Yes, even my front door is an arched door, which I think is pretty weird in an apartment building.

And you have a red portrait on a red painted wall in your apartment. Were you trying to create something of a domestic environment?

That can be helpful, too. But seeing art in a gallery space is different from seeing it in a domestic space. In a gallery, there is no other object than the artworks. In a domestic space, the art is in conversation with so many different objects. Both situations are very exciting to deal with. Painting directly onto walls is a part of my practice, so sometimes a collector will ask me to paint directly on a wall inside a house. I really like doing these projects, because the wall painting is in direct conversation with many other objects that I didn’t choose. Sometimes those conversations work really well and I end up preferring the work in a private home rather than in the gallery space. I feel more comfortable living with coloured walls than white ones. You try to make different objects talk to each other in a productive way. It’s exciting to see how the cactus is talking to the rug and how the coffee table is avoiding the blanket. 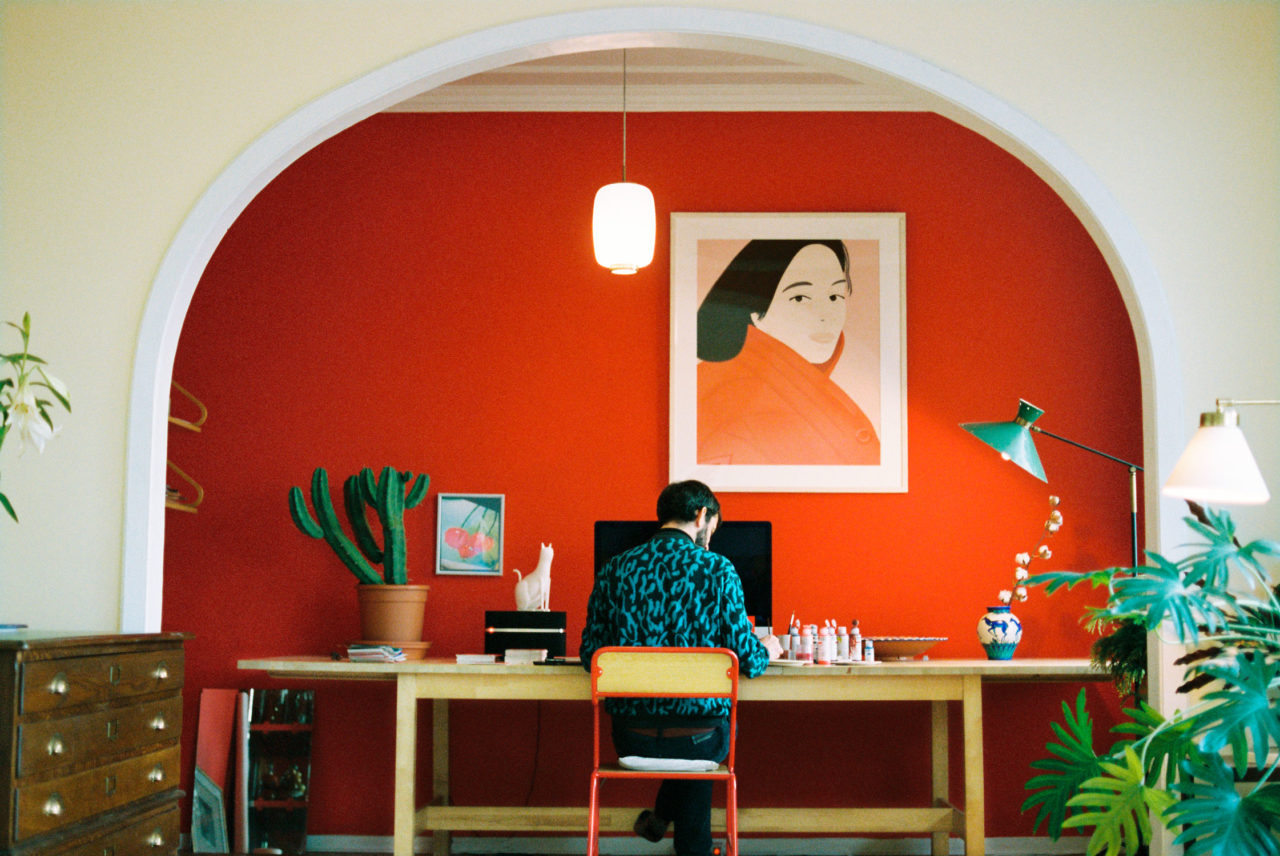 Is that how the architectural interventions started, then? With domestic spaces?

I guess it started in Neuchâtel. When I did a show there, we built a lot of fake walls so that my work was only hung on those walls and not on the regular walls of the space. In French they call these types of walls cimaise, which is also what I titled the show. It’s interesting because the word was first used in Greek to describe an ornament over a door, like a decorative thing with no function. Then it was the name used for the traditional type of hanging, where you couldn’t drill into walls or tapestries, so everything was hung from wires. And now it’s used to describe the walls in museums and galleries that are built temporarily.

The museum in Neuchâtel is an old factory of some kind, and they had built all these walls to be able to hang art and have exhibitions, but the walls don’t go all the way to the top and you can see the original space. You see it and you feel like you’re in a space that had a totally different function. I wanted to build my own structure inside the space, but I didn’t want just rectangles. That for me was quite boring because the murals I was painting on them were quite decorative, so I made a lot of different shapes.

Different shaped walls give the idea of a different type of space as well: a wall with a high peak at the top would be connected to a very peaked roof, or if it were round, or even stepped. The design connects it more to a whole space.

I would think someone like Sol LeWitt probably preferred things when they weren’t perfect. The best wall drawings are the ones that are in a real space, an imperfect space—like a staircase or something—where the drawing actually interacts with the space. Like in the tradition of frescoes in churches or even paintings in caves. It’s a very different function to a painting on a canvas. There is something about the expression of volume that gives a new dimension. It’s like how you would see things if you were scuba diving. You’re looking down, up, left, right, and everywhere there is something to see.

Exactly. The experience of those churches is much more like that. So when I do murals, I would like it to be more of a physical experience. 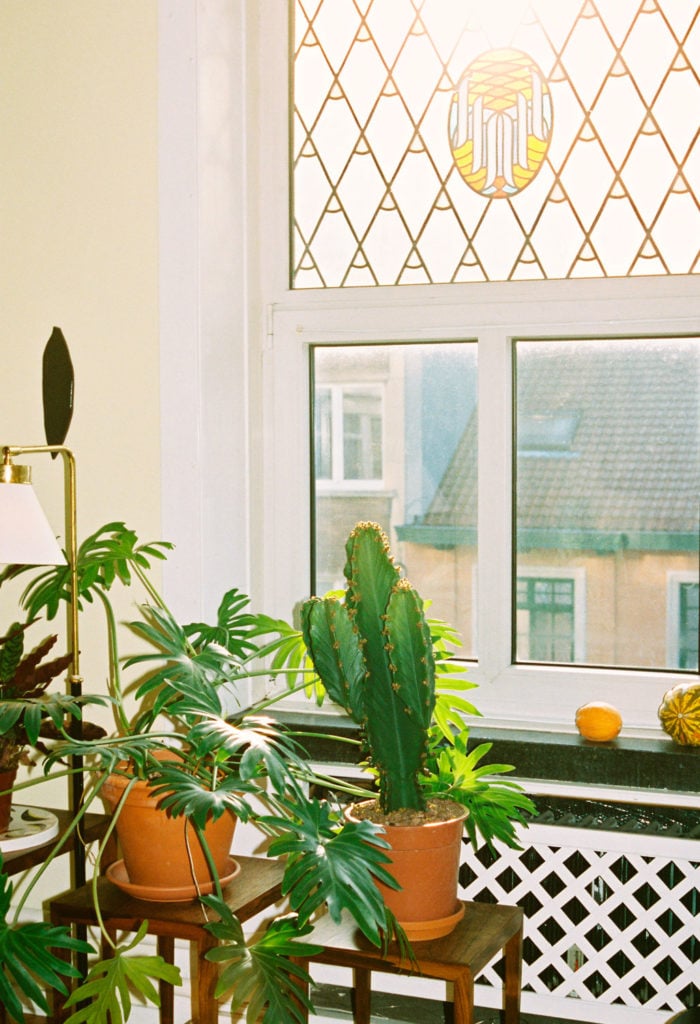 Does the physical space of a city affect your work? Sometimes when you are out of town and you send me things you’re working on, they often have a very different feeling to the things you make in New York. Do you think it’s the physical space, or is it just about your personal experience of the city?

I left Switzerland 11 years ago, and I’ve lived in three different places: Glasgow, Brussels, and now New York. When I was in Lausanne, in Switzerland, the artist John M Armleder was directly influencing many art students. Because of his work, almost every artist there was making wall paintings and hanging something on them. I did my MFA in Glasgow, and what was interesting to me is that everybody was naming artists that they thought everybody else knew, but didn’t. We all acted surprised when we named artists and nobody else knew who they were. Living in a city makes you discover the country’s art history. In Brussels, I discovered Léon Spilliaert, a painter from the early 20th century that I have been looking at very closely since I moved to Belgium. There is also something very touching about walking and seeing the same streets and trees as some artist that you love. In Brussels you can feel René Magritte’s visual universe in many different moments and places. 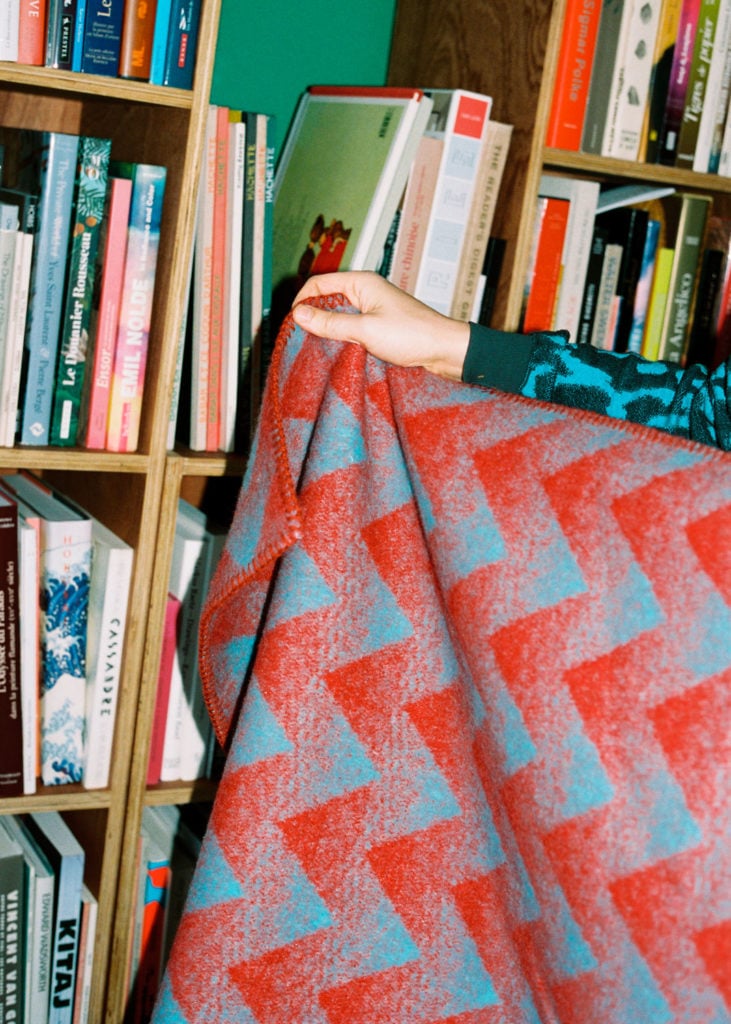 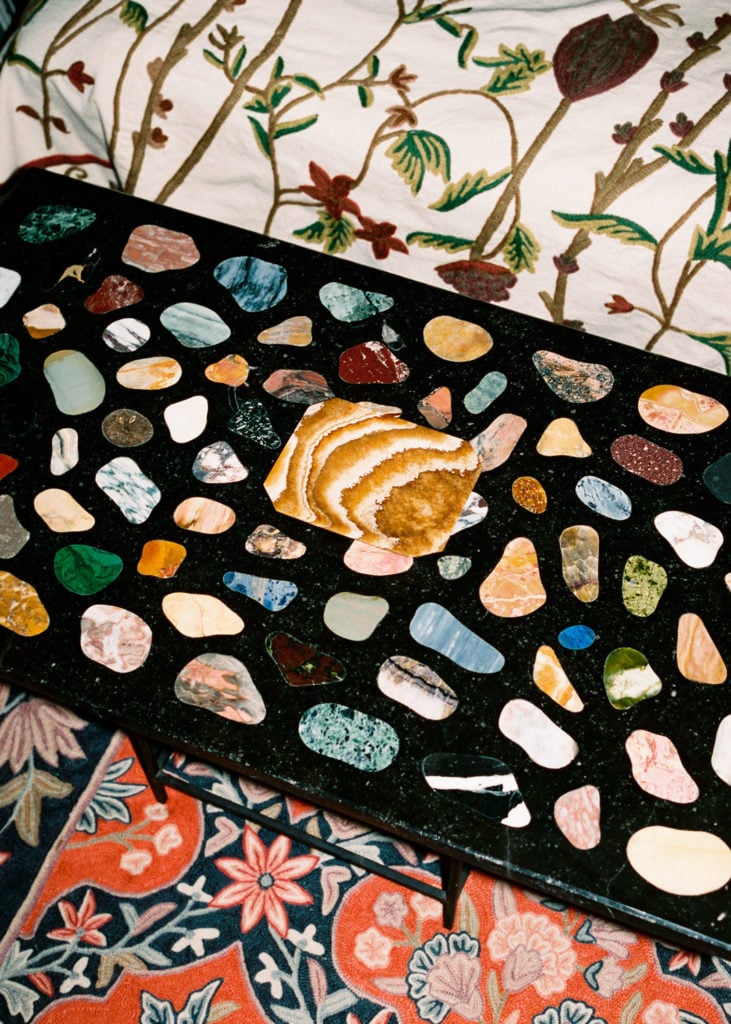 This is an excerpt. The full interview is featured in Apartamento Magazine issue #21, out now! Visit our online shop to place your order.

The spine of issue #21 features an original artwork by Nicolas Party :)

The spine of issue #21 features an original artwork by Nicolas Party :)
09/09
Shop
The product is being added to cart!